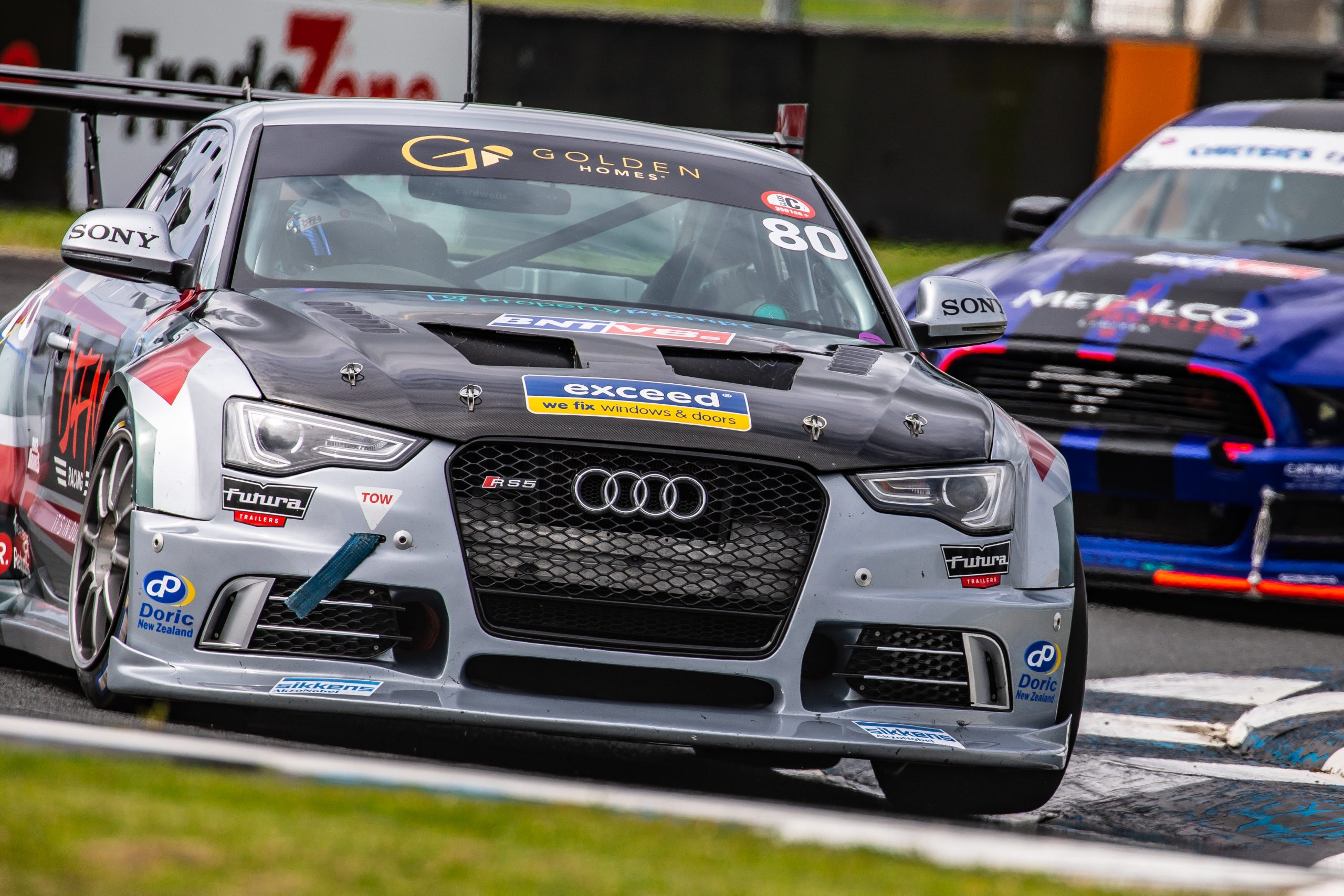 Jono Lester and Kerry Jones have shared the wins in the first two qualifying races in the opening round of the 2020/21 BNT V8s championship at Pukekohe Park.

Lester cruised home to a commanding race one victory in a straightforward fashion, while Jones resisted some late pressure by a hard-charging Tim Edgell in the afternoon’s second seven-lapper.

However, talk of the day was a lap one crash in race two, which had Nick Ross ride the concrete barrier that lines the outside of the turn one.

The Total Oils Nissan Altima was lifted into the air, scaling the barrier and caving in some of the wooden horse gate in the process.

The race was immediately red-flagged, and Ross’ weekend is likely over given the amount of damage sustained in the crash.

A fast start by Lester was pivotal for victory in the day’s opening qualifying race as the GT ace led home Edgell by less than one second at the chequered flag.

Lester led all seven tours of the Pukekohe circuit, setting the race’s fastest time – 1m03.720 – on his third effort.

The most intriguing on-track battle was the duel for third, eventually headed by reigning series champion Andre Heimgartner in the Hamilton Asphalts Holden Commodore.

Heimgartner will be doing double duties this weekend, teaming up with Alexandra Whitley in the final round of the NZ Toyota 86 endurance series.

Kerry Jones was the sole Transam in the field, and the sheer muscle of his Corvette C5 was enough to have him end up fourth on the road, two-seconds adrift of Heimgartner.

With their much-anticipated MARC II V8 car still in transit from Australia, Collins Motorsport brought out the popular NASCAR-powered Mustang for this weekend’s opening round.

Running as high as third and posting times within one second of Lester’s race-winning pace, a set-up drama had Sam Collins slip to over 20-seconds behind Jones in the last two laps, and he yielded a position to Robert Wallace in the process.

The silver lining for the team is that both of today’s races have a minor implication on the championship, with the focus of the weekend on Sunday’s one-hour feature race.

The second race of the day was a reverse marble draw, with Wallace leading Ross on the run into turn one.

There, Ross dipped out of view as his Altima sent a wave of gravel across the track before he collided with the barrier.

When the race was eventually resumed behind the safety car some twenty minutes later, newly-promoted race leader Jones commanded all of the remaining few laps, leaving Edgell to take revenge on Lester by beating the Audi home to claim second.

Collins seemed to have rectified the set-up gremlin that was bothering him from race one to hold on to fourth.

Wallace ended up fifth ahead of the BMW E46 of Shaun Varney.

Lance Hughes took over from Heimgartner for the second race, but he retired from damage picked up in the Ross incident.